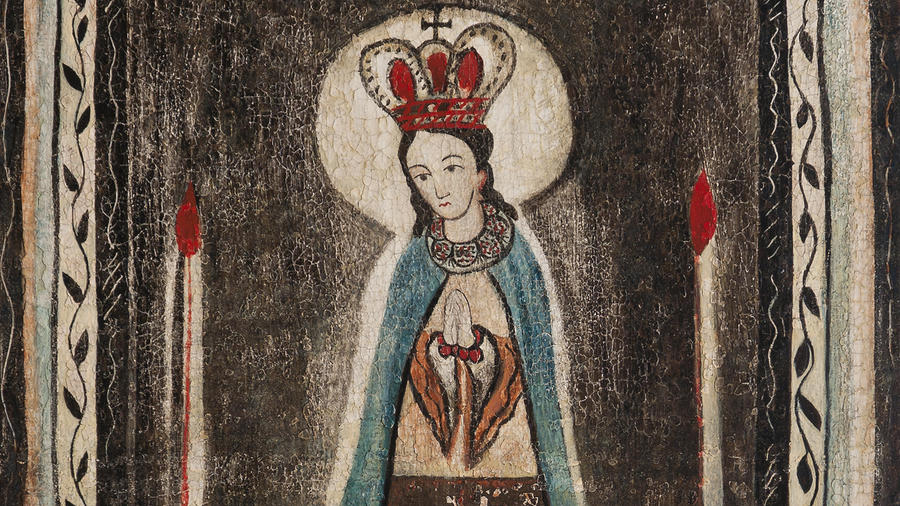 The Larry and Alyce Frank Collection of santos—Nuevomexicano religious objects—is one of the most well-known and popular collections at the New Mexico History Museum.

This collection is unique for its historical, cultural, and religious significance for the Nuevomexicano community. Whereas these pieces were seen as "primitive" in the late 19th century through the mid-20th century, they have since become some of the most sought-after pieces of Nuevomexicano folk art.

Collectively known as santos, these two- and three-dimensional objects have historically been used in Spanish-speaking Catholic churches, chapels, and homes. Bultos are three-dimensional wooden sculptures carved in the round, coated in handmade gesso (yeso) and painted. Similarly, retablos are painted panels of wood or hide. The subject matter is similar for both bultos and retablos: highly revered saints and scenes from the life of Christ. All of them were made locally using native wood and roots and painted with indigenous pigments.

Compiled over the course of four decades, the Franks began acquiring these pieces in the early 1960s when they relocated from California to Arroyo Hondo, a village northwest of Taos. The majority of the santos in this collection were made in the 19th century, especially during the Mexican period (1821-1848) and into the American Territorial period (1850-1911).

This collection features over two hundred santos and contains works produced by the Laguna Santero, José Rafael Aragón, Molleno, A.J. Santero, Pedro Antonio Fresquís, José Aragón, Juan Miguel Herrera, and others. All of these santeros and their creations were celebrated in Tesoros de Devoción / Treasures of Devotion, a popular exhibition in the Palace of the Governors from 2008-2018.