Though the source of the Segesser Hide Paintings is obscure, their significance cannot be clearer: the hides are rare examples of the earliest known depictions of colonial life in the United States. Moreover, the tanned and smoothed hides carry the very faces of men whose descendants live in New Mexico today. Perhaps both paintings illustrate military expeditions dispatched from the Palace of the Governors, when it was called las casas reales, the royal houses.

The hides are on display in the Palace of the Governors; a computer interactive offering more detailed information about the sections is next door at the New Mexico History Museum (on the same campus) and can also be found online here.

How they came to be at the Palace of the Governors is a tale as circuitous as it was fortuitous. The hides found their way back to the Southwest—and eventually to the Palace—more than 200 years after Philipp von Segesser von Brunegg, a Jesuit priest, sent them to his family in Switzerland in 1758. It is believed that he acquired them in Sonora, Mexico, between 1732 and 1758, from the Anzas, a family that was prominent in military and civil affairs in both New Mexico and the Sonoran village where Father Segesser’s mission was situated.

Segesser I and II were painted on hides, likely bison, that had been tanned to make them supple, pumiced so that the grain was no longer visible, and sewn together to form a large canvas. The hides do not exhibit any distinctive ground or gesso layer under the paint.

Some scholars believe that the Segesser Hide Paintings were created in New Mexico, where imported canvas was rare and processed hides were used for a variety of purposes, including paintings on hide, or reposteros, that were exported to Mexico. There is documentary evidence that hides were painted in workshops in Santa Fe. Because the Segesser renderings include several distinct styles, some scholars suggest that as many as three artists painted specific elements of the overall rendering. We believe that the artists were indigenous New Mexicans with tribal affiliation who had the benefit of eyewitness descriptions and were taught European painting techniques. Yet the Segesser paintings were not rendered in a traditional European style typical of military paintings of that era; rather they are more characteristic of indigenous or folk-art paintings.

The late 17th and early 18th centuries were the final great period of European battle tapestries. Such textiles, imported to the Americas, might have influenced the commissioned Segesser hides. The hides contain wide, broadly painted flower and leaf borders that simulate carved or gilded frames, which also was typical of European tapestries from the same era.

This set of hides represents an encounter between rival tribesmen, the attacking side possibly accompanied by a Spanish leader. Scholars agree that the painting’s features, including hills, cliffs, deciduous trees, bison, deer and pumas, indicate that this encounter took place over varied terrain.

Who took part in the conflict and where and when it occurred remains the subject of scholarly debate. Basing their theories on historical records and the painting’s account of the event, some scholars suggest that Segesser I portrays one or more Spanish officers with Indian allies—possibly the Manso, Opata, Tlascalan, Tarascan, Pima and a faction of the Suma—who are attacking rival Sumas or Apaches, in the El Paso, Texas region.

Others say that the painters were unfamiliar with both the encounter and the cultures involved, and so substituted familiar individuals, animals and terrain in a painting that actually portrays Pueblo Indian auxiliaries attacking Plains Apache Indians. Such fighting took place in any one of a half-dozen expeditions launched between 1693 and 1719 from the Palace to the eastern plains to discourage raids by tribal factions.

Because the encounter has not been pinpointed, it is not known if the individuals behind the wooden palisade are members of the defending tribe or captive slaves taken from other tribes. The attackers on horseback are equipped with Spanish weapons, clothing and leather armor to distinguish them from the opposition.

There are pieces missing from the original rendering. Parts were separated from the work sometime before 1908 and given to a Segesser family member where they are today.

These hides depict a disastrous, 1720 rout of Spanish troops and their allies in present-day Nebraska.

Throughout the Spanish Colonial period, officials at the Palace of the Governors routinely dispatched troops to patrol and explore beyond the colonial boundaries. Hearing of encroachment by the French, New Mexico Governor Antonio Valverde y Cosio dispatched Spanish troops and Pueblo Indian auxiliaries to verify the rumors. Led by New Mexico Lieutenant Governor and Commander-in-chief Pedro de Villasur, the military expedition also was charged with locating a suitable site on the remote eastern plains for a Spanish military post, requested by the Spanish Viceroy in Mexico City.

The Villasur expedition headed north from Santa Fe to Taos, turned east, then northeast into present-day Kansas. They followed a Pawnee route to the Platte River, moving north into eastern Nebraska. Beyond the junction of the Platte and Loup rivers, they encountered a large Pawnee Indian encampment. Villasur initiated a dialogue and asked Juan de Archibeque (Jean l’Archévêque), a Frenchman and expedition interpreter, to write a letter in French to a European within the Pawnee camp. The efforts failed and sensing a potentially hostile situation, the expedition retreated and camped at the confluence of the Loup and Platte rivers.

The Segesser II painting can be pinpointed to the August 13, 1720, skirmish at the expedition camp. After daybreak, the Pawnee and their Oto Indian allies—illustrated throughout the painting by their painted and unclothed bodies and shaved or close-cropped heads—ambushed the Villasur party. The painting also includes 37 French soldiers, identified by their European-style clothing—conical hats, coats, breeches, cuffs and leggings—firing long arms at the Spanish military expedition.

Composed of 43 royal troops, three Spanish civilians, 60 Pueblo Indian auxiliaries and several other Indian allies, the Villasur expedition was caught off guard, and the pitched battle left many of them for dead in the tall prairie grass. The attack was a major catastrophe for New Mexico and casualties amounted to a third of the province’s best soldiers. The center of the painting portrays French soldiers with Pawnee and Oto supporters surrounding the camp. At the right of the painting, Villasur expedition members who were guarding the animals are shown running to assist their Spanish comrades.

Interestingly, oral and written accounts of the battle do not mention French soldiers in the area of the encounter. Several Villasur survivors reported a volley of musket fire, but in the confusion of the battle, they did not know who was attacking them. It is possible that French traders took part in the ambush. Governor Valverde y Cosio, perhaps in an effort to defend the actions of Villasur, reported “two hundred Frenchmen had fired, supported by a countless number of Pawnee allies.” 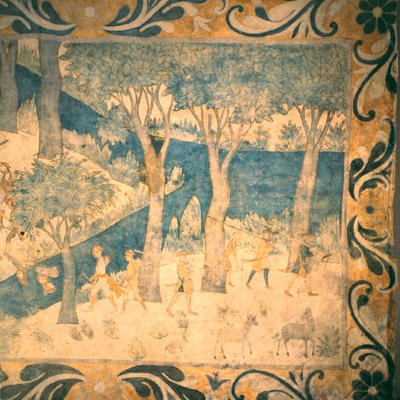