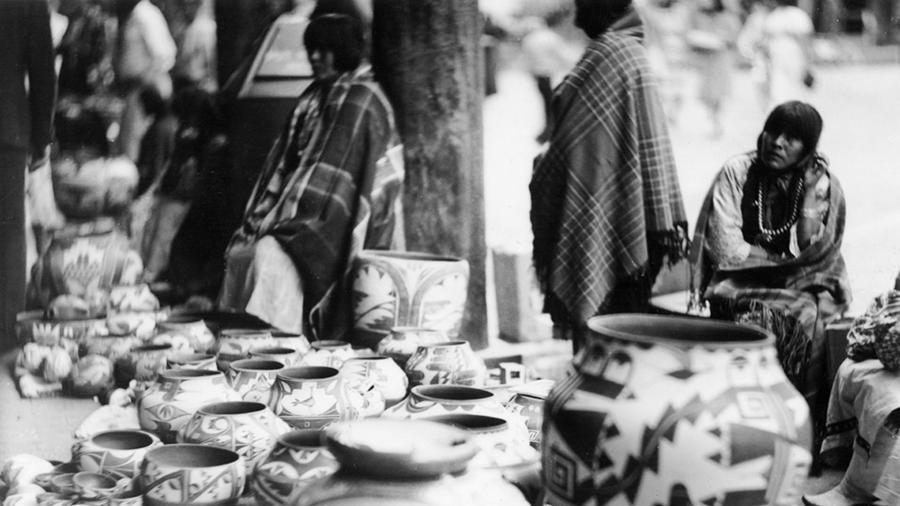 History of the Portal Program

The unique marketplace under the portal of the Palace of the Governors has grown out of centuries of interaction, as members of various communities from the Southwest traveled to and gathered around the Santa Fe Plaza to sell and trade goods. This marketplace evolved from both everyday business activities and from opportunities created by public events drawing large groups of people to the capital city. Prior to the organization of formal markets in the 20th century, the portal had a tradition as a market for agricultural products and produce, game, and more utilitarian pottery and basketry.

One origin for the modern day Portal Program is 1936, when Maria Chabot, Executive Secretary for the New Mexico Association of Indian Affairs, organized weekly markets under the Palace portal. They were partially inspired by the very first annual Indian market in 1922, officially known as the Southwest Indian Fair and Arts and Crafts Exhibition, held by the Museum of New Mexico nearby. This exhibition, which targeted crowds attending Santa Fe Fiesta, drew upon expectations that had grown around older territorial fairs, ceremonial gatherings, civic festivals, and trade events. The weekend markets of the 1930s evolved into today’s annual "Indian Market" organized by the Southwest Association of Indian Arts (SWAIA) as well as into the Native American Vendors Portal Program at the New Mexico History Museum.

The popularity of the portal among buyers and sellers increased throughout the 1970s. Concerned that an open market had developed on museum grounds, the Museum of New Mexico Board of Regents in 1972 established policy designating the portal area for sales by Native American artists only and prohibiting sales elsewhere on museum grounds. Despite museum policy, non-Native Americans continued to sell goods under the portal for some time. In 1974 a committee of Native American portal participants, recognizing the need for program regulation, developed a series of program rules that would eventually be adopted by the museum. In 1979 the court upheld the museum’s freedom to decide the content and participation in its program. Portal vendors continue to have an active role in setting and enforcing program rules.

The presence of artists under the portal is an integral part of the history of the Museum of New Mexico. which reserves the portal for the display and sale of arts by members of federally recognized Native American tribes, pueblos, or nations located within New Mexico. In doing so, the Museum continually contributes to the preservation of indigenous culture while providing learning opportunities to the visiting public through direct interactions with Native artists. As part of the Portal Program, members of Pueblo, Navajo and Apache communities display their art for nearly two million tourists each year.