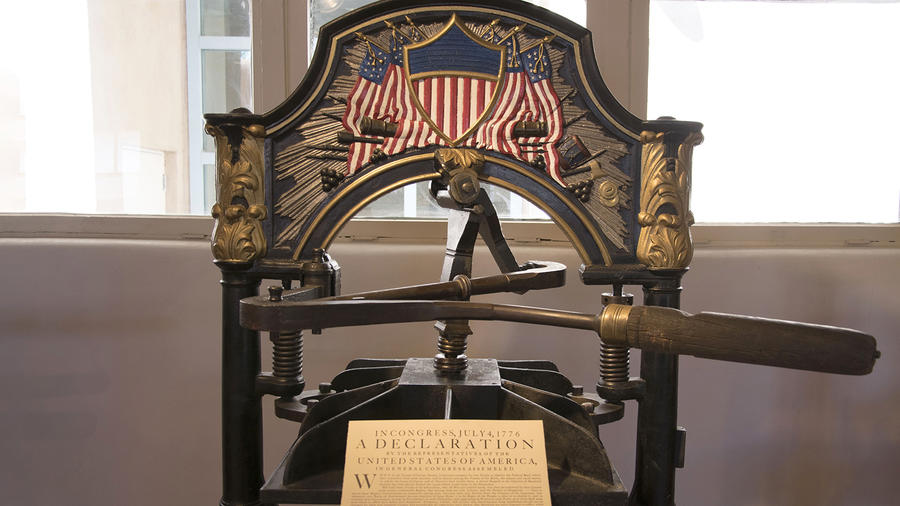 Washington hand press with a commemorative reprinting of the Declaration of Independence. Photo by Hannah Abelbeck

Collections at the Press

A visit to the Press of the Palace of the Governors is like walking into any frontier printing office in the nineteenth century. All of the historic presses on exhibit have seen years of service and all stand ready if called on to get out the news. As well as being part of the state’s rich literary legacy, the presses in the collection continue to produce printed items that can be purchased in the shop: limited edition books and portfolios, broadsides, cards and posters.

One of the prizes of our collection is an elaborately decorated Washington Hand Press built in 1876 by the Cincinnati Type Foundry. Found in a barn in Hatch, New Mexico, this press was brought to the museum in 1970 where it was restored to working condition. Used in the Black Range, a mining area in the middle western portion of the state, it may have been in use printing a newspaper called the Hatch Reporter as late as 1927. The patriotic icons that were cast into the press’s framework are in honor of the 1876 Centennial of the United States. Most recently, the press was used to print our popular facsimile of the Declaration of Independence.

One legend tells of another Washington press that was thrown into the Rio Grande near Mesilla to prevent its use during the American Civil War. It is not recorded which side perpetrated the vandalism, or whether or not the press was retrieved.

Shortly after their development in the first half of the 19th century, jobbing platens became the workhorse of letterpress shops. A table model variety was used by parlor printers and the larger standing presses were used by nearly every commercial printing firm. Several models can be seen at the Press of the Palace of Governors—including the 1899 press by Chandler & Price known as the Estancia Press, an 1890 Kelsey Star, and table model platens manufactured by both of these companies.

Included is the Estancia Press, a 10 x 15 Chandler & Price (C&P) platen press built in 1899. It was used in 1908 to print Songs of the Cowboys, the world’s first publication of cowboy ballads. Once powered by steam, the press—used here to print books and broadsides—is treadle operated and hand fed as it was originally designed to function.

A product of the Kelsey Company in Meriden, Connecticut, our Kelsey Star was used in Taos during the 1920s and 1930s. It was one of the largest models built by William Kelsey, who became famous for producing presses for young amateurs. In Taos, it was used by Walter Willard "Spud" Johnson, who chronicled the comings and goings of the Taos community of writers and artists in his tiny humorous newspaper called The Horse Fly. Johnson also produced The Laughing Horse, a literary magazine that featured such well-known writers as Carl Sandburg, D.H. Lawrence, and Upton Sinclair.

Find out more about our Baumann collections on the page about the Baumann Studio exhibt.

The Press of the Palace printing plate collection is made up of more than 5,000 items. This includes relief printing plates in wood and linoleum created by New Mexico artists as well as copper and zinc plates that have been produced by a photo mechanical process. The collection documents New Mexico history through images of regional art and architecture, folklife, commercial developments, and the environment.

Also housed at the Press of the Palace is a collection of books, periodicals, and pamphlets focusing on the arts of the book. Printing history, calligraphy, papermaking, illustration and typography are just a few of the topics covered by the volumes. Current periodicals tell of book exhibits throughout the country, design, competitions, equipment for sale and workshops offered in various hand techniques used in the making of books. The research library is open to the public during regular Museum hours; however, an appointment for using this facility is advised.