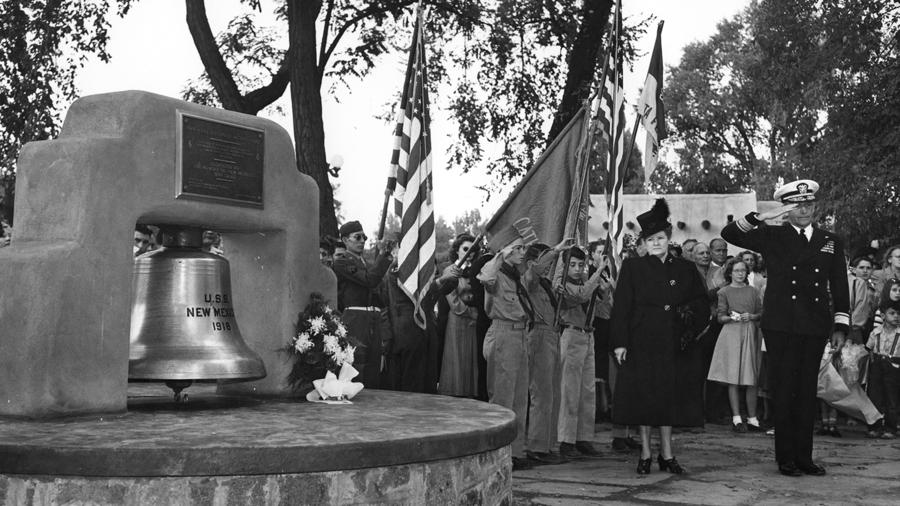 During the 64 days of the 1945 Okinawa campaign, the bell of the USS New Mexico rang that alarm for battle 82 times, and for another 86 it sounded the alert for attacks by air. Though silent now, the bell is a tangible reminder of the bravery of the men who served aboard this storied battleship.

The ship that carried our state’s name was launched on April 23, 1917. She was the Navy’s most advanced warship during the 1920s and was the first to be powered by turbo-electric motors. The USS New Mexico consistently won awards for gunnery, engineering and battle efficiency and in doing so earned the nickname “Queen of the Fleet.”

During World War II her sailors defended their ship through two Kamikaze strikes, suffering 88 fatalities, including the loss of her commander. Yet after each encounter, the New Mexico quickly returned to fight in the remaining Pacific campaigns. In all, she was awarded six battle stars for service at Okinawa, Luzon, the Aleutians, the Gilbert Islands, the Marshall Islands, and the Marianas.

On September 2, 1945 the USS New Mexico joined the USS Missouri and other ships from the Navy’s Third Fleet in Tokyo Bay for the surrender of Japanese forces. After a return voyage to Boston Harbor, “The Queen” proudly ended her service on Navy Day in 1945.

The New Mexico History Museum is honored to be the home of an iconic bell from this ship.

We have other collections related to the USS New Mexico including: